A good logo identifies a business. A great logo tells you their story. As a series, Silicon Valley serves up wicked satire of tech culture and its namesake region, packed with inside jokes and easter eggs. As a story, the fictional company Pied Piper’s trajectory informs their brand, which routinely morphs as the startup evolves.

Pied Piper’s growing pains are immediately apparent, with an entire episode dedicated to spoofing many tech startup chestnuts, including:

As far as the actual logo: the “first official purchase of Pied Piper” was a crappy t-shirt with generic clip art. Erlich later recruits a graffiti artist to paint a new logo on their garage door, only asking for something original. This shortsighted grant of artistic license naturally backfires, and is never seen or used again.

Both of these rudderless branding attempts are peppered with vulgar humor (this is an R-rated comedy, after all), but that’s beside the point. A bunch of guys in a room with a groundbreaking product and no vision evokes Apple’s original logo: an exceedingly ornate illustration without practicable brand value.

After a visit from law enforcement, Erlich talks the graffiti artist into a revision that “you white boys might like”. Which turns out to be generic and uninspired.

Tech companies have a curious tendency of lowercase lettered logotypes. As the story goes, the punchline is the “white boys'” failure to visually define themselves, and default to a “safe” – albeit vanilla brand.

Hired-gun CEO “Action” Jack Barker had this version created without consent of the founders. 3.0’s clean, simplified “feather and hat” icon and typeface is a significant step forward as a brand and Pied Piper’s maturation to a legitimate company. Yet, it is derivative of their direct competitor Hooli’s brand: a predictable outcome for an unimaginative executive in the vein of a Steve Ballmer. And, as the limit of Jack Barker’s “action” amounted to aping a competitor, he predictably went to work for them. 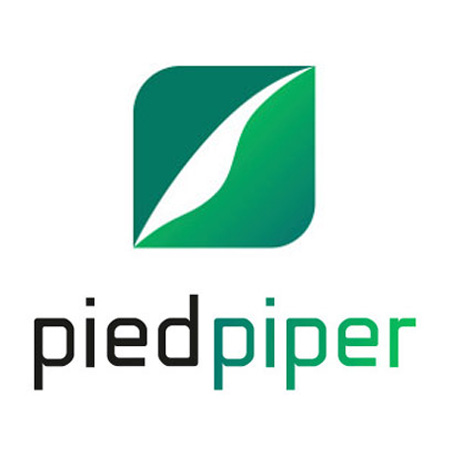 With only one season left, 4.0 (introduced in season five) is presumably the final version. As a story arc, it’s the file compression company’s brand distilled to its purest form. Light and clean with simple letterforms, it reduces the artifice of the “pied piper” metaphor down to a simplified feather graphic, subtly showing the company’s completion of its arc: successfully having gone to market with a peerless product, and no longer bound by fickle investors or indifferent senior executives.

On a final note, I would point out the visual narrative of each logo’s introduction. When it appears on screen and protagonist Richard Hendricks is facing forward he’s in charge, literally standing behind his product. When a new logo is introduced and his back is to the camera, he’s a passive witness to an out of control calamity.

As of this writing, Silicon Valley still has seven unaired episodes left in the series, so it remains to be seen if Pied Piper will succeed.

The original trademark owner of Pied Piper is a technology-averse layman who becomes enraged after believing he was conned by a "billionaire".

Erlich Bachman learns the hard way (or maybe he doesn't) that hallucinogenics aren't a gateway to enlightenment.

The original Pied Piper logo looks exactly like what you would expect to get from a cheap t-shirt vendor.

The "safe" Pied Piper logo with lowercase P's is as unoffensive as it is uninteresting.

Transition from founder to employee.

The Pied Piper logo in season three serves as a reality check to the founders: they're employees at their own company.

Introduced in new office space in the fifth season, this logo shows Pied Piper's maturation as a product and a business.

Graphic Designer/Web Developer with two decades of print and web experience for publications, marketing and commerce.